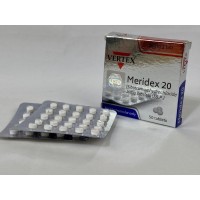 Reductil / Meridia is a very popular diet pill that is used to help men and women with weight loss issues. The people who seem to benefit the most from Reductil are those who are severely obese. People who are under 16 years of age or pregnant and nursing women should not use Reductil. Meridia, with the generic name of Sibutramine, is essentially indicated for obesity management, which would include the promotion and maintenance of weight loss. This drug must be used together with having a reduced calorie diet. Doctors recommended the intake of Meridia for those obese patients and individuals that have an initial body mass index of more than 30 kg/m2 or more than 27 kg/m2 and are under conditions such as diabetes, hypertension, dyslipidemia. The body mass index indicated here can be calculated through the division of the weight of the patient (in kilograms) by the height of the patient (in meters).

How does it Work?

Reductil / Meridia works through boosting the levels of specific chemical messengers that are present in the nervous system. These chemicals would include dopamine, serotonin and norepinephrine. It works through the inhibition of the reuptake of dopamine, serotonin and the neurochemicals norepinephrine that would, in turn, suppress the patients appetite through the brains appetite control center. In this way, Reductil/Meridia can be comparable to the way anti-depressants, like Prozac, work. Though the patient may still feel hungry, the amount of food that would make him feel full would be considerably less. This would result into smaller portions and less food intake.

For a starting dose of Meridia, the recommended amount would be 10 mg once a day. It could be taken with or without food. Now, if in any case, the weight loss is insufficient, the dose could be titrated after around four weeks for a total of about 15 mg once a day. Be reminded, though, that doses more than 15 mg a day are not recommended. 5 mg doses could, however, be administered if the patient is unable to tolerate 10 mg doses. As for the dose titration, changes in the heart rate and blood pressure must be considered and monitored.

Generally, Meridia is tolerable. Some of the more commonly observed side effects would include a dry mouth, constipation and insomnia. There have also been reports that some patients had convulsions. However, these were the patients who already had predisposing factors for seizures. Another reported side effect would be ecchymosis or bleeding, which has been studied to be because of the possible effects of Meridia on platelet function, which is a result of the drugs effect on serotonin uptake. Some other side effects are flatulence, diarrhea, peripheral oedema, gastroenteritis, agitation, arthritis, hypertonia as well as some menstrual disorders.

Meridia Storage Meridia has to be stored at a room temperature of not more than 77 degrees F, equivalent to 25 degrees C. It should also be placed in a container which is tightly-closed and without humidity. Like most drugs, Meridia should always be kept out of children reach.